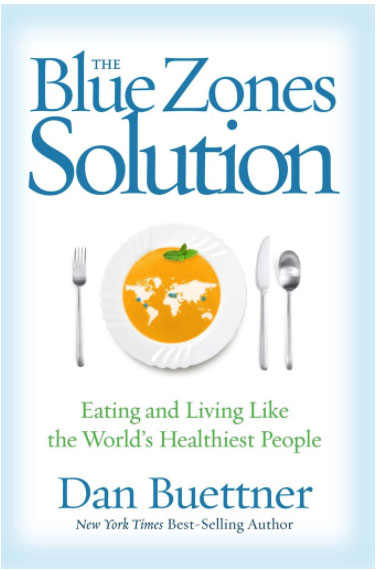 The Blue Zones Solution by Dan Buettner from National Geographic was one of my favorite health books from last year. Dan's research reveals how the world's longest-lived people actually live their lives. It's all about adding life to years, not just years to life.

For more than ten years, Dan has been researching the Blue Zones around the world. The Blue Zones are longevity "hot spots" - where there are not only the highest concentrations of people living over 100 years, but also that these people grow old without the typical chronic diseases of heart problems, obesity, cancer or diabetes. And they prosper in the most meaningful ways.

The phrase 'blue zones' came purely from researchers circling these areas on a map with blue ink!

Where are the Blue Zones?

In 2009, Dan identified five places that were Blue Zones:

Dan and his team spent considerable time studying each of these areas in order to characterize their lifestyle, behaviors, culture, and environment to see what, if anything, they had in common. He listened to the stories of the centenarians, watched them as they cooked, and ate with them. The book then details the lessons can we learn from these zones.

What are the differences and what are the commonalities between these populations?

The result is that there is NOT one very specific "right" way for living and eating. Rather, we find out that there are variations on a theme that produce amazing outcomes among diverse populations. Dan pulls all the data together to show us how to create a pleasurable long healthy life that we can share with people we love.

Yes, this shows us that one size doesn't fit all - but certain common themes can work for us all. Nine commonalities were identified from the five Blue Zones that have a powerful effect on longevity and health. These are known as the Power Nine.

The commonalities found in diet and lifestyle among the Blue Zones turned out to be nine lessons. These are:

How does this apply to me?

Now that these Power Nine have been identified, Dan guides us in how to create where we live into a Blue Zone. He offers examples of new Blue Zones that have been created in Finland, Minnesota, Los Angeles, and the state of Iowa.

He talks not only of diet changes and lifestyle changes we can make as individuals and in our homes, but how we can change our community and get others involved too.

Finally the book gives us 77 Blue Zones recipes focusing on the commonalities of the different diets.

To find out more check the Blue Zones website where you’ll also find his TED talk and a three minute "true vitality test", which gives you a guide to your longevity based on the Blue Zones findings. Dan has three different Blue Zone books – but I like the Blue Zones Solutions one the best - as it is his most up to date research. It is definitely worth a read. Buy two and give one to a friend/family member.