Earlier Onset of Puberty in Girls Linked to Obesity 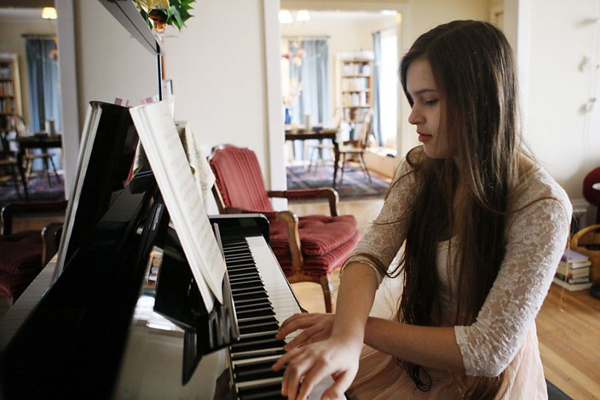 In 2003, Zero Breast Cancer collaborated with scientists from Kaiser Division of Research and UCSF to establish a Bay Area Breast Cancer and the Environment Research Program which was funded by the National Institute of Health Sciences and the National Cancer Institute.

In 2012, Zero Breast Cancer received funding to establish a Youth Advisory Board to allow study participants the opportunity to provide input into the research and to learn more about research process and the CYGNET study.

Continue reading, for more information on the CYGNET Study, the Youth Advisory Board and findings from the recent study linking obesity to early age onset of puberty.

Earlier Onset of Puberty in Girls Linked to Obesity

New research in Pediatrics shows that obesity is the largest predictor of earlier onset puberty in girls, a phenomenon which is affecting white girls at younger ages than previously reported.

Published online Nov. 3, the multi-institutional study strengthens a growing body of research documenting the earlier onset of puberty in girls of all races.

Researchers at centers including Kaiser Permanente in the San Francisco Bay Area, as well as sites in Cincinnati and New York City, examined the ages at the onset of breast development of 1,239 girls, and the impact of body mass index and race/ethnicity. The girls ranged in age from 6 to 8 years at enrollment and were followed at regular intervals from 2004 to 2011. Researchers used well-established criteria of pubertal maturation, including the five stages of breast development known as the Tanner Breast Stages.

“In this longitudinal study, we confirmed that the age and onset of puberty does seem to be occurring earlier than was found in previous observational studies,” said Lawrence H. Kushi, ScD, a study co-author and principal investigator for the San Francisco Bay Area study center, known as the Cohort study of Young Girls’ Nutrition, Environment, and Transitions (CYGNET). “We had standardized, trained personnel who did the Tanner Stage assessment, which gives us more confidence in the results.”

Girls with earlier maturation are at risk for a multitude of challenges, including lower self-esteem, higher rates of depression, norm-breaking behaviors and lower academic achievement. Early maturation also results in greater risks of obesity, hypertension and several cancers – including breast, ovarian and endometrial cancer.

The San Francisco Bay Area cohort included 444 girls recruited from Kaiser Permanente medical centers in Oakland, San Francisco and Marin County, with an average age of 7.4 years old at the time of enrollment; 22% of the girls were black, 12% Asian, 24% Hispanic and 42% white.

The girls were followed longitudinally, which involved multiple annual visits for each girl. Researchers said this method provides a good perspective on what happened to each girl and when it occurred.

Body mass index was a stronger predictor of earlier puberty than race or ethnicity. Although the research team is still working to identify other environmental and physiological factors behind the phenomenon, they conclude that the earlier onset of puberty in white girls is likely caused by higher rates of obesity.

The study was conducted through the Breast Cancer and Environment Research Program, established by the National Institute of Environmental Health Sciences and the National Cancer Institute. The lead author is Frank Biro, MD, of Cincinnati Children’s Hospital Medical Center. Pediatrics is the journal of the American Academy of Pediatrics.

About the Kaiser Permanente Division of Research
The Kaiser Permanente Division of Research conducts, publishes and disseminates epidemiologic and health services research to improve the health and medical care of Kaiser Permanente members and society at large. It seeks to understand the determinants of illness and well-being, and to improve the quality and cost-effectiveness of health care. Currently, DOR’s 550-plus staff is working on more than 250 epidemiological and health services research projects. For more information, visit www.dor.kaiser.org or follow us @KPDOR.

About Kaiser Permanente
Kaiser Permanente is committed to helping shape the future of health care. We are recognized as one of America’s leading health care providers and not-for-profit health plans. Founded in 1945, our mission is to provide high-quality, affordable health care services and to improve the health of our members and the communities we serve. We currently serve 9.1 million members in eight states and the District of Columbia. Care for members and patients is focused on their total health and guided by their personal physicians, specialists and team of caregivers. Our expert and caring medical teams are empowered and supported by industry-leading technology advances and tools for health promotion, disease prevention, state-of-the-art care delivery and world-class chronic disease management. Kaiser Permanente is dedicated to care innovations, clinical research, health education and the support of community health. For more information, go to: kp.org/share.

This research is also generating some media attention:

Girls are starting puberty at younger ages - a full year earlier than previously reported in some cases - and the main factor associated with early breast development is obesity, according to a new long-term study released Monday.

SFGate
Early onset of puberty in girls linked to obesity

Girls are starting puberty at younger ages - a full year earlier than previously reported in some cases - and the main factor associated with early breast development is obesity, according to a new long-term study released Monday.

There’s yet another reason to worry about the obesity epidemic among America’s kids: Extra weight may be sending U.S. girls into puberty earlier than ever.