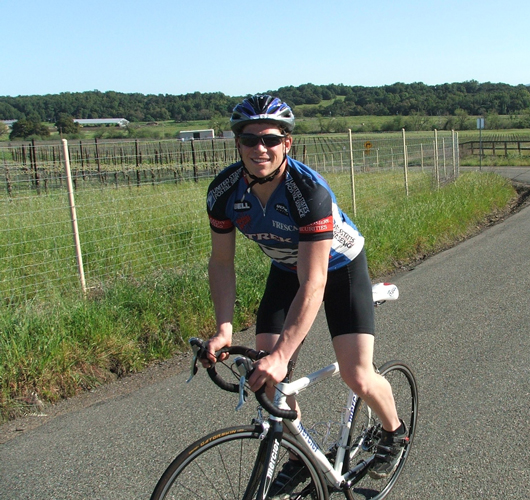 Alex Leason was 16 years old when his mother, who lives in Mill Valley was diagnosed with breast cancer five years ago. "She went through chemo and is doing great now," reports her son. But the experience inspired Alex to do something to help the cause.

A biology major and pre-med student at Sonoma State University, Alex says, "Since I"m interested in medicine and research, I wanted to help a prevention and research group, ZBC does both, so it's a win-win." To map the trip from San Francisco to Yorktown, Virginia - by way of America's Heartland - Alex turned to the Adventure Cycling Association (ACA), which provides cyclists with maps of safe, scenic routes, plus information on camping, food, and other resources.

Broiling hot weather, gas station meals, and a shortage of baths and showers weren't the only challenges, said Alex, recalling the bike trip's literally bumpy start. First, one of Alex's two original cycling partners had to back out of the trip. Then, when Alex and his second cycling buddy, Bryan Rengel, were barely 15 miles into the ride, Bryan crashed, breaking his clavicle in three places. ("Bryan's OK now, but he was bummed" about withdrawing from the adventure, says Alex.)

After a 10-day delay, through the ACA Alex found a new cycling partner, 23-year-old Arthur Luchowski of Philadelphia. "We met on Saturday, and took off on Sunday, June 3," syas Alex. Alex hauled a Bob Yak trailer and Arthur a rear pannier set-up loaded iwth camping gear and supplies, weighing about 50 pounds. Alex flew a ZBC flag on his trailer, wore a bike jersey with the ZBC logo, and distributed flyers about his fundraising project.

"We averaged 80 miles a day, and rested one day a week," says Alex. Team ZBC fell into a routine of cycling all day, stopping to check out the ACA's recommendations for sightseeing, food, and lodging. The cyclists usually camped overnight or stayed in churches or small hotels. Occasionally, the cyclists were invited into people's homes to shower or rest overnight - something that surprised Alex.

"In small towns, people who may only have a mobile home or a car that barely gets them to work, offered us dinner and a shower," says Alex. "That's the biggest thing I learned - the generosity and hospitality of people. It's crazy how nice people are. Churches welcome cyclists, so we stayed in a few churches, and at volunteer fire departments. But there were definitely some nights where we'd roll into town and not know where we were spending the night."

Food was less of a problem. "I'm the king of gas station dinners - beef jerky, ice cream bars, nuts, and energy drinks in the morning," laughs Alex. "We'd sometimes go to restaurants, where we'd plan our day, but we'd always be very smelly and overstay our welcome."

The cross-country trip opened Alex's eyes culturally. "I saw different economies, heard how conversations changed according to the regions, the harvest, and the weather. Harvest came early because of the drought," he reports. "In Kentucky and West Virginia, I saw how coal mines were being shut down, and people were getting laid off. You can't understand different people, in different regions, without going there." To record his observations, he made notes in a handbook, usually at night in his tent. "Now I have to dictate them into my online blog," he says. Alex took hundreds of photos, too.

The toughest part of the ride? "Nevada and Eastern Kansas were very monotonous - deserts and hay fields for miles. Kansas was 105 degrees, with hayfields that were dry to the bone. Seeing green in Missouri was something else - just knowing there was water around was a relief. Kentucky had some gnarly hills. Colorado had the highest mountains, but the actual grade was less steep. We had some beautiful cycling in Utah's national parks - Bryce Canyon, Grand Staircase - Escalante and Capital Reef. But the most beautiful riding was in Colorado, where we rode through the "Fourteenerers" - mountains over 14,000 feet. It was just beautiful."

They met other cyclists along the route, including two brothers who traveled with them from Kentucky to Yorktown, VA, near Williamsburg, where they finished their journey at the Victory Monument, a lnadmark commemorating the Revolutionary War. Alex shipped his bike home to California and took the Mega Bus to D.C. and New York to see the sights, flying home in early August. And in case you're wondering: Alex lost only 10 pounds on the trip, noting, "I think all those gas station ice cream bars kept the weight on!"

Despite the heat, hard hills, and endless haystacks, Alex's Pedaling for Prevention adventure had a life-changing impact. "If you have the time, I highly recommend the trip. Breast cancer, any kind of cancer, affects everyone. And I"m still fundraising for ZBC!" To donate to Pedaling for Prevention and to read Alex's blog about the trip, visit http://pedalingforprevention.wordpress.com/