Christine Jon'el On Ableism and Racism in Breast Cancer 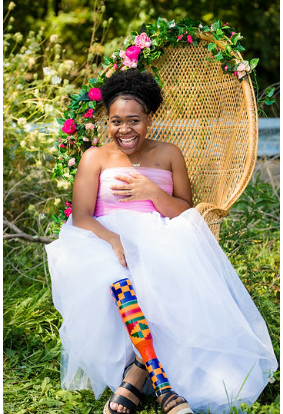 Christine Jon’el is a young, Black woman living with an amputation who has survived cancer two times. When we first spoke with her a few months ago, her passion for calling out ableism and racism in breast cancer was clear. We are grateful that she agreed to be interviewed so we can share her insights with you!

Q: Since your breast cancer came after your childhood cancer and disability, can you tell us about your experience?

A: Okay, when I was two years old, my mom found a grapefruit sized tumor on my right calf and eventually I was diagnosed with stage III rhabdomyosarcoma. As a result, they gave my mom the option between radiation, which would have left me as a full-time wheelchair user, or amputation, which I could have gotten a prosthetic for. My mom decided she would go for an amputation. I will go on the record, that was the best choice. So, I grew up with one leg which is a very obvious physical disability. However, my mom didn’t get the necessary resources to care for a child with a disability. She ultimately did the best she could do, which unfortunately had some adverse side effects and turned into a lot of inner ableism, which I had no idea that I was getting.

I was fighting every day in school, the kids were touching me and the teachers were punishing me for being different because I really think society didn’t understand how I could have a leg missing and have this coherent brain function but still struggle in school both academically and socially. There’s this whole stereotype of people with disabilities: straight A students, everyone’s friend, and isn’t an issue [problem]. And I was the opposite. I was this loud, little Black girl running around on one leg not letting anyone push me around, who was struggling academically. Me trying to protect myself, from the outside looking in was as if I was always a problem, because I was always in the middle of everything. So I grew up very much with this narrative and I honestly didn’t even know what it was. I internalized it as genuinely I am a problem child.

But the interesting thing is, I didn’t know what ableism was until February 2021. And it’s June! And once I heard that word, I was like Ah, that’s it! I had a whole epiphany. I understood how, because of the lack of information, ableism was able to come in every form, in my household, in the hospitals, and inside of the education system. As a child, there were times we were financially struggling. If my mom would have really embraced the fact that I had a disability, there was help we probably could have gotten. Knowing that I would have been in and out of school, I could have gotten an education plan. But because I wasn’t able to say that I had a disability, I missed out on all of this and it really did a lot of damage to my upbringing.

So I grew up, even well into my 20s, still with that very much internalized into the fabric of my being. Before there was anything, there was ableism.

Q: What role do you see ableism play in your breast cancer experience?

A: A lot of my stories with ableism and breast cancer revolve around when I worked at a bank. I would run into issues where I would get chemo brain or brain fog. Something would happen where I’d blank out and forget the next step. One time, I went home and left out $25,000 cash. Quarters, pennies, all of it. Another time, I remember I was talking to the manager explaining that something happened because of my memory. I think he told me something and I immediately forgot it. And I was like I’m so sorry, I didn’t mean to blank out. He was like what’s wrong with you, and I’m like: chemo brain. At this time, I was like 2 years out. He said you’re not in chemo anymore, you don’t have that. And I’m just like, have you ever had cancer? It’s a lot longer than that. Like, do you know what it is?

In my experience as a woman with a disability, a very obvious disability, people see that I want to push my body. People see Christine doesn’t have limits, so they’ll use me as a pack mule and common sense is my upper body strength isn’t as strong as it used to be. I had a double mastectomy, they took all of it. My upper body strength isn’t as strong and especially in my days of working at the bank 2-3 years out of treatment, it was very weak. And so having to carry bags and bags of money was difficult. I mean, I would have to carry up to $800,000 cash to fill 3 ATMs and if I needed help, sometimes I could get help. They were like you’re strong, you can walk around on one leg all day, you have to be strong. I was like it’s heavy! It’s by my right breast, it’s making my muscle flex, it feels heavy, can you carry it? So it’s just like, in small things, that a small help could do, they just make it like this monumental issue.

Some women have had breast cancer treatment be more disabling than my leg is disabling to me. Whether it’s dealing with lymphedema, chronic fatigue, neuropathy, all of these, not to forget the cognitive damage that happens from having these chemos and radiations and all of these really terrible things on your body that your body becomes kind of toxic on this cocktail of medications. It affects me, who is doing very well after 5 and 20 something years after treatment. Then seeing how it impacts people who aren’t used to having a disability, people who aren’t used to being in the medical field, people who aren’t used to being a patient. They are struggling to then go back into the world as if that didn’t happen. We just had cancer! A lot has happened! But because of the stigma around the word disability itself and also ableism that happens everywhere in society, people don’t get the help they need.

Q: Can you say more about how you advocate for people with breast cancer to take on the identity of having a disability?

A: I advocate for anybody who’s had cancer or any other type of chronic illness to be okay with having a disability, which doesn’t mean disabled. I have a leg missing, I just lifted a 200 lb tire last week like it was nothing. I did it twice, I ate it like it was cake, but still, I need help, I need some equity. Just a hands up so that I am on par with everyone else.

Everything makes it so if you have a disabling feature or ailment, you don’t want to ask for help and you don’t want to talk about it. Number one lesson in having a disability is to learn how to ask for help. Until you really acknowledge your disability, you can’t get help. People need to be open to not only accepting the word disability but also accepting the help that comes with it, because there’s so much help out there. You can get paid time off from work, you can take short-term disability, you can get an emotional support dog and not pay fees. I just want people to access the resources that are available. If you aren’t open to having a disability, and you don’t get away from the stigma, it’s going to be like my childhood. We shouldn’t be struggling. Not in 2021. There’s too much stuff going on.

Q: What can breast cancer organizations do to address racism and ableism?

A: For one, breast cancer organizations could do a better job at connecting with Black women and Black people in general, because Black men and non-binary people get breast cancer, too. They need to do more than just the token Black person on a flier. I mean going to these low income neighborhoods, going to these small businesses in your areas that are predominantly Black and offer resources and help. Doing a small event, saying hey there’s something called FMLA, your doctor probably isn’t going to tell you about it, let me help you out. Hey, you just had cancer, you need a job? You don’t want to directly tell your job why there’s a three year gap on your resume? Let’s help you out, because there’s resources for those problems.