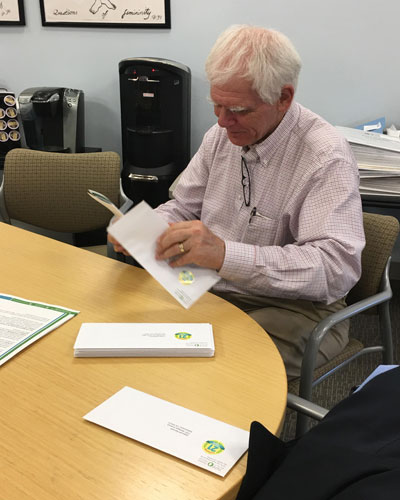 As well as volunteering, Peter is an engaging writer and blogger and his writing is at its finest and most impassioned when it gets most personal. It doesn't get more painful than the story of how his mother died of breast cancer when he was 10 years old and how he came to understand her death. With his permission, we have his piece titled "Mom's Gone" here:

The date is August 7, 1957. It’s hard to believe that almost six decades have passed, but a look at the calendar, not to mention the event’s subsequent loneliness, make it easy to confirm. A shrink would have a field day with this one! Actually, he did! You see, the date is the day my mother left this world—died, to be blunt. She was a victim of breast cancer. She lasted barely a year after a radical mastectomy was performed that was, only to the surgeon and my father, a sham waste of time performed mainly to make my mother believe that she actually had some hope of survival. Actually, as the surgeon knew the instant his blade divided her flesh, her fate was already sealed, her future irretrievably determined—she had none! I learned soon after the funeral that on the start of the surgery, he knew the vile contagion had already gone beyond the point where anything remedial would have any effect. At that point, he told my father the terrible news and, in turn, promised that my mother would be kept blissfully ignorant of what lay in store for her. If she ever found out, the intelligence would not come from Dr. Dice ‘n Slice.
After release from the hospital, she returned to her ‘normal’ life—except there was nothing normal about it. She didn’t know she was busy dying. At the time, neither did her three kids.
Time passed and she soldiered on—the wash, groceries, running the household—as her body began its long, agonizing downward spiral.
The three kids, your narrator among them, went away to summer camp as always. Why not? No-one had informed us it would be the last summer for this family.
I burned through July, a typical humid and heated New England summer, receiving the weekly letter from home keeping me up to date—but not really. There was no pre-printed schedule to check, no checkpoint to mark off a list—at least none that any human eye could track. But make no mistake. A timetable was being precisely observed—by her body.
Metastacization is a tough word to deal with if you’re a contestant in a spelling bee. It is far worse if the contest is one for possession of your body—and, ultimately, it never loses—you do! So it was with Mom.
Today it was her lungs. Next week her organs got in line. A few months passed and it was her stomach. Finally, her brain. It was time for the final act.
I came home one day on a camp hike, but also a surprise visit to Mom. What I walked into was the worst scene I’d ever seen to that point. She lay there obviously very sick, unable to keep any nourishment down at all. Her skin was a badly faded grey, the color of cigarette ash long after the butt had burned out and been deposited in a convenient ash tray. When I approached and she raised her arms to hug her first born, that skin hung like the sails on a becalmed boat. The only voyage in her immediate future was going to be crossing the Styx.
I never saw her again. I of course was at her funeral the following weekend. But that wasn’t her lying there in quiet repose. It was just a husk, an obscene leftover that this vile invader had stolen from my life, a scene that I would carry for the rest of my life.