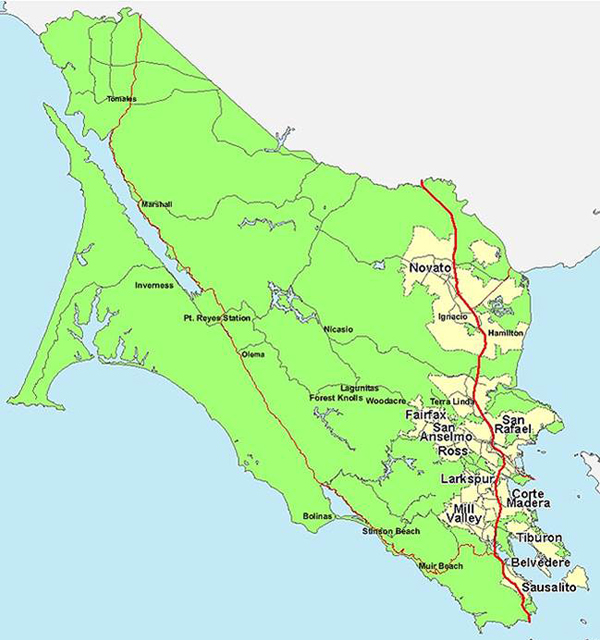 In 1994, the Northern California Cancer Center (now known as the Cancer Prevention Institute of California) released a report entitled: Breast Cancer in the Greater Bay Area.

The report based on Surveillance, Epidemiology, and End Results (SEER) Data revealed that the SF Bay Area, specifically Marin County had the highest incidence rates of invasive breast cancer in the world.

The first page of the report contained a chart comparing breast cancer incidence rates among women in 20 countries/populations, including Japan, India, Columbia, France, Australia, Hawaii and the San Francisco/Oakland area.  In visually striking terms, the bar chart showed that:

Initially the article was published in the Greater Bay Area Registry Report: A Publication of the Northern California Cancer Center, which was mailed primarily to cancer researchers, public health professionals and medical clinicians. But shortly after publication of that particular issue, the report made its way into the breast cancer advocacy networks.

In early 1995, the report was handed out to over 200 attendees at a public hearing entitled Women, Health and Environmental Community Action, held at San Francisco City Hall and presided over by Mayor Willie Brown and US Senator Bella Abzug, who subsequently died of breast cancer. 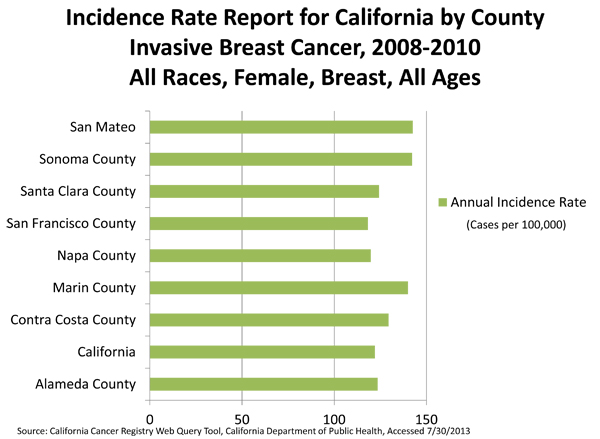 The conference motivated the foundation of Zero Breast Cancer, formerly Marin Breast Cancer Watch (MBCW) in the fall of 1995 by Francine Levien and Wendy Tanowitz; who attended the conference shortly after Levien was diagnosed with breast cancer. It was at this conference that Levien and Tanowitz learned that, not only did the Bay Area have the highest breast cancer incidence rates in the world, but Marin County had the highest incidence in the Bay Area.

Levien had been active in the antiwar and civil rights movements during the 1960's and was now part of the alternative health movement in the Bay Area.  Tanowitz was active in a variety of environmental and social justice issues. Both lived in Marin County. MBCW started out as a small group of women meeting in Levien’s living room, sharing materials, ideas and information. Their goal from the very beginning was to discover and eliminate the reasons for Marin’s high breast cancer rates. The reasons were assumed to be environmental in origin. From the beginning, the definition of environment was broad and included lifestyle choices, psychosocial and societal factors, foods and nutrients, prescription drugs, as well as exposures to both natural and synthetic chemicals, toxins and contaminants. The opportunity to prevent breast cancer by altering environmental factors is the most promising path forward. In 2006, Marin Breast Cancer Watch changed its name to Zero Breast Cancer to better reflect the organization’s mission. 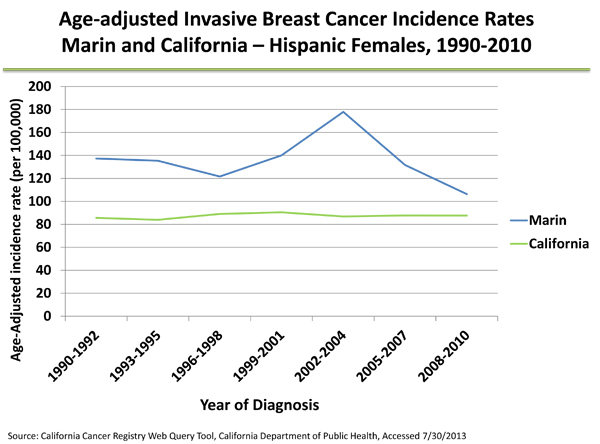 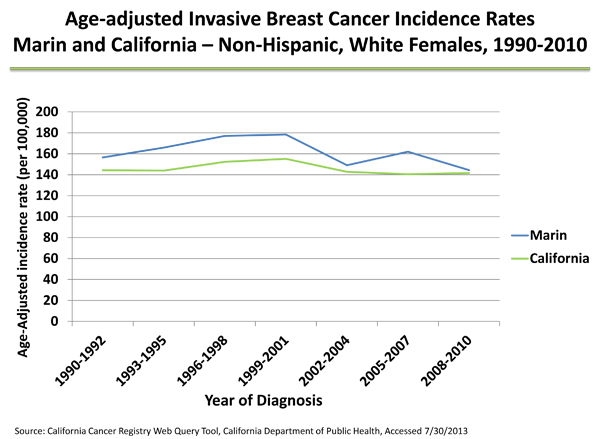 According to the 2010 US census, 15% of Marin’s population is now Hispanic, a 43% increase since the 2000 US census. The majority of Marin’s Latinas live in the “Canal Neighborhood” in San Rafael, largely speak Spanish at home, rent their homes, are younger, have larger families and lower incomes when compared with San Rafael and Marin, as a whole. A completely different demographic than white, non-Hispanic women in Marin County.

What do we know about Marin Women and their breast cancer risk?

As a county, we probably know more about breast cancer in women living in Marin than any other county. Here is a summary of what we know: 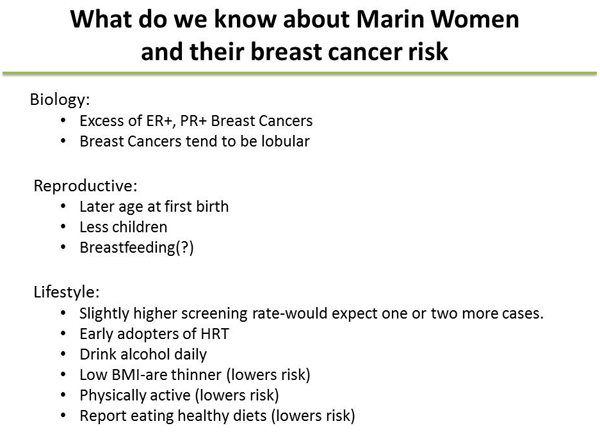 Often, people attribute the high rates of breast cancer in Marin solely to the demographics and reproductive behaviors of the women who live there. Marin women have less children, have children at later ages, have a higher education level, higher socioeconomic level, took hormone replacement therapy, drink on average 2 glasses on alcohol per day, etc. While these risk factors contribute to our understanding of the high incidence of breast cancer in Marin, they are only a part of the puzzle. We need to shift our ways of researching and understanding breast cancer and expand our focus to the role other factors may be playing, particularly modifiable factors such as environmental exposures. If we can find environmental factors, such as chemical exposures that are contributing to breast cancer risk, we can take action to modify those exposures and prevent the occurrence of future breast cancers.

We believe that what ZBC has done in the past 18 years is a model for other communities interesting in addressing breast cancer, environmental and public health concerns. We know that the work of ZBC has had an impact on communities throughout the SFBA. And we know that what we discover in Marin County as well as what is discovered through the Breast Cancer and the Environment Research Program will impact the health of women and communities all around the world.